When I was around 18 a girl from work said something like “what’s wrong with you? have you not listened to James Holden!?” as if it was a big thing that I hadn’t. She proceeded to play it while we were smoking that afternoon. Somehow, this album gave me something that my metal and trance infused head had not seen yet.

I guess that, in retrospect, it was the selection of the tracks, and how much I did not grasp how much creativity and sceneries fitted in one album. Later I understood it was all those artists’ creations put together in a single line; the craft of DJs and its curatorial benefits.

So far I had been in the “dj’s are crap” camp, but these type of episodes allowed my young brain to re-arrange. It also showed me another face of electronic music that I started exploring from that point on. That is the reason I remember this album as a sort of pivotal moment. Somehow I found the composition to be more interesting that other things I was listening at the time.   Later, this album came with me when I travelled to London for the first time, I was on my player for the times I got lost in the city, and while I was working cleaning a hostel in exchange of free accommodation. It was also one of those albums that you have to listen from beginning to end to get it, so it served as great meditation.

I also remember the numerous times we were with the pals hanging out in the car, listening to this album, and those that we discovered after it; from the same James Holden: CD1, At the Controls, etc, but also others. This one brings a mesh of memories that come together in a good feeling type of bundle. I even feel as if I have to now listen to it with care, so as to only contribute positively to the memories that are added to that bundle. 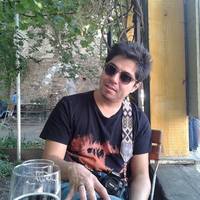 Roberto Becerra (México, 1986) is an artist, engineer, multidisciplinary and sound maker. Co-founder of Ideas Block creative space and Arttice and programmer and assistant lecturer at Lithuanian Academy of Music and Theatre currently living in Vilnius.