“Oh my, how fresh we would be if we took our dreams seriously.”

Every lyric of this song feels like what life is about now. Georgia Anne Muldrow’s song “Runaway” serves the purpose that art is, in its highest form — a path for the future. It is pleasant and palatable, yet points you toward new possibilities.

Georgia Anne maintains a transformative prowess as a songwriter, singer, producer, thinker and changemaker. Much like another master writer, Bob Marley, who is oddly aligned to this song with his own, “Running Away.” In the late 90s, that was the song I had on repeat, because I was in fact, running away at the time from a problem that seemed too big to stay still and confront.

Now here in 2010, came Georgia Anne, crooning, “If you feel like you’re running, don’t run away, but take off and fly, use this lifetime as a runway.”

Whether it was playing this song on repeat, or the feelgood animated video, or just the change of the years, I can now say that every line of this transformational song resonates with my life path. Imagine if we all “take off and fly.” As a singer-songwriter, her delving into deep metaphysical concepts with lightness, and the ability to stay away from getting preachy, was a beautiful lesson.

This is one of those songs (and videos) that starts the day off with a power kick. A daily multivitamin that might have to go back into the daily rotation. “Woke up and realized I was free to be anything if it was in integrity with what I dream….”

Turning dreams into reality — the overtone of this song — became my life’s work over time, and now, looking back, I must wonder if it all started with this one uplifting song. 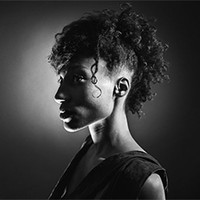 Ingrid Sibley is a cultural architect, dreamer and life scripter, currently working on orchestrating a global Black conversation that reconnects our people across previous points of division. Black Box is the moniker of this project, and its New Orleans iteration manifested in a series of magazines, an art book and workbook and workshop series around how to write the future. Currently living in Harlem, NYC.

Finally was able to check out Kate’s show yester

Saw the homie @jakobdwight ‘s artwork on the cov

End of year hangout with the homie Loganic tomorro

Just in Case you missed the live show on THF Radio