Gymnopédie No. 1 by Erik Satie
via Ale Hop

The first time I heard Gymnopédie No.1, I was living near the beach, in the district of Chorrillos, in the city of Lima. The name Chorrillos, the district where I grew up, was made in reference to the streams (“chorros” in Spanish) of fresh underground water that flowed from the cliffs to the side of the beach, and because it was a fishing village; for which it was officially called “San Pedro de los Chorrillos”.

I left my house after listening to Satie and went down two blocks in the opposite direction to my destination with the purpose of seeing the ocean once more. It was a winter afternoon, my favorite time of the year since the beach was always empty. I thought that his piece’s tempo was similar to the tempo with which the ocean waves moved. Each note falls gently up and down, holding onto the next, slowly, creating the illusion that a surface is woven on which one could gently float. I found the idea of surface space moving like waves extraordinary because of the sea’s rhythmic contractions; it gives a sense of firmness that feels untidy and stable at the same time. I lived in that house for most of my childhood. And I felt constantly influenced by the whims of the tide. I found it curious how people associate the sea with calm and tranquility when it is a colossal, noisy mass, spewing air and salt. I think this is related to the elegant and cyclical way it moves.

Ten years later, I casually travelled to Normandy and discovered by chance that a few kilometers from where I was staying, the house of Erik Satie was located, now made a tourist museum that could be visited. Leaving his museum that afternoon, I walked a few blocks away and found Normandy’s beach. A much calmer and transparent sea than the frantic ocean from Chorrillos. I wonder if the composer saw that horizon daily and if it had any influence on him. 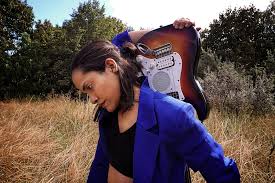 Ale Hop is an artist, researcher, and experimental instrumentalist. She composes electronic and electroacoustic music, by blending strains of noise, pop, avant-garde, ambient and a complex repertoire of extended techniques for electric guitar and real-time sampling devices which she uses as her sound vocabulary to craft a performance of astonishing physical intensity, saturated of layers of distortion and stunning atmospheres.

To purchase Erik Satie in Europe