The Elements by Tom Lehrer
via Ed Hall

This is music that I was introduced to as a very small child. I had very strange parents. My mom worked at the Pentagon—literally, doing data entry, not the typing pool—at a time when she would be considered a computer technician—when most people didn’t know computers existed. And she wrote a letter, on a computer punch-card, to my dad, who as far as I know was half of the Tuskegee Airmen in the Pacific Theatre. While most of the Tuskegee Airmen were fighter pilots in Europe, Daddy and his tentmate were liaison officers, who flew brass from island to island, and [Daddy was also] a spotter for artillery …. Despite flying a plane that had no weaponry, [he] had two kills to his record.

My parents were enormously educated people. Exposed me to a house full of books. Exposed me to Charles Addams cartoons, “The Addams Family”. And my dad had the first of the Tom Lehrer satire records. Tom Lehrer—a good German name—who, as far as I know, is a secular Jew; he remains, in my mind, the premiere American satirist, who started in the 50s and had a relatively short career—making music about American politics, foibles, human nature—and he takes a rather dim view of it. This was the first comedic material I was exposed to.

The album that my parents had, that we essentially wore the grooves off of, was called “An Evening Wasted with Tom Lehrer”. He was very up front about grinding on his own voice, his own piano playing, even though he was an adept pianist and vocalist.

But the song that I want to talk about is “The Elements”, as it is also illuminative to the journey I have taken to understand how my mind works, and how memory works for me. Literally, it took me half a century to learn this song.

I learned to read, reading comic books. I remember struggling through one of my sisters’ Archie comics. In one story that predates aspects of our surveillance society, Veronica has purchased this system where she has put bugs on Archie and Betty, so that she can keep Archie to herself. One of them shows up on her remote-tracking monitor, where one is blue and one is red, and she responds “Gakkk!!! Purple!!!”. I mean, no one says “Gakkk”, right!?! You think more like, “Ack”, but you know, I was kindergarten age, and we didn’t understand those conventions. And I wouldn’t understand those conventions for decades.

Fast-forward to when I finally determined, a few years back, that I would teach myself the chemical elements song. The chemical elements song is basically just Lehrer, who is a pretty-sophisticated, Ivy League mathematics schoolteacher, reciting all of the chemical elements known at his time, set to the vaguely recognizable tune of “I Am the Very Model of a Modern Major General”, by the very famous pair of Gilbert and Sullivan. He does a quite adept version of the melody on the piano. I used to sing the other songs when I was in Catholic school to entertain the nuns. In doing so, this was one of the ways to guarantee myself good grades. Later on, I would learn how to entertain teachers on the page. And this was confirmed through my Advanced Placement English teacher, senior year of high school, who said that, and I’m paraphrasing, “Someone like Eddie had a chance at making a living through writing, because of his awareness of his audience, and writing in a way that made it fun for readers to read his words”. You know, words like that make an impact on somebody.

The way I finally learned that song was, I came across this video on YouTube. I came across this one particular animated video that has the grid of the Periodic Table of elements, empty. And every time he sang an element’s name, it dropped from behind the camera, through an imaginary space, into its proper place on the table itself. And that’s how I learned it. You see, what I had to do was to unlearn the fake version that I had, crayoned, in my head. Some of the names, of course, he pronounces differently than most people do, along with certain words that no one says, like “praseodymium”, made it easy to mistake words and misunderstand them.

I had to use the visuals in the animation to unlearn what I thought I knew the wording of the song to be, which is how this goes back to learning to read from comic books, because this is how I realized that I learn: visually. 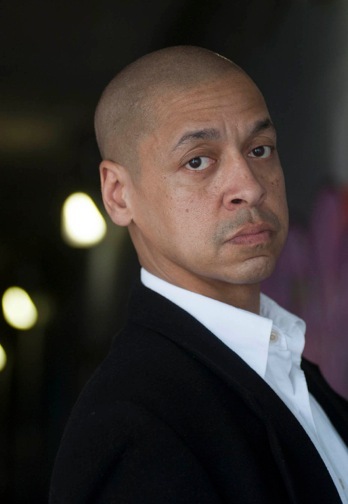 Edward Austin Hall is a poet and journalist. His writings about comics and comics creators have appeared in the Atlanta Journal-Constitution, Code Z: Black Visual Culture Now, and the Dictionary of Literary Biography. His poetry has appeared in Catalyst and Eyedrum Periodically. He serves on the programming committee for the AJC Decatur Book Festival and ran a longtime monthly literary salon called Writers Exchange. Hall is a graduate of Tulane University. He co-edited the 2013 anthology Mothership: Tales from Afrofuturism and Beyond. His first novel is titled Dread Isle.